Loop-based music is for much more than dancing and DJs. I’ve used loops for three movie soundtracks, dozens of industrial video soundtracks, a radio commercial, and several remixes. For most of my rock tunes, I use acoustic drum loops (and by following some of the tips in this article, actual drummers are convinced I use a “real” drummer). Using loops is also a friendly way to get into music, because the process is more like collage—you don’t need great technical chops, just a solid musical sense of how to arrange disparate elements into a musical experience.

However you do need good source material, starting with sample and loop libraries. I’ve created two libraries that are available from Reverb.com—AdrenaLinn Guitars and Electronic Ear Candy. But to get the absolute most out of loop libraries, it’s important to move beyond the constraints associated with this method of making music. The tips presented in this post, coupled with a little editing time, will help you add a more creative, humanized element to loop-based music.

This is the key to making loops interesting. Loops need to tread a fine line of being consistent enough to create a groove, but with sufficient variation to keep the listener from tuning out. The most effective way to do this is to chop the loops into pieces, and then re-arrange them to add variety (Fig. 1).

Figure 1: The green loop on the left has been chopped into pieces, and re-arranged to create the blue loop on the right, which results in a variation on the original loop.

Slicing and dicing can also help on an arrangement level. In Fig. 2, the section outlined in red shows how three loops have been extended an eighth-note to add an extra downbeat to start off a break. The section outlined in blue highlights a high-hat loop chopped into individual hits, almost like one-shots, to add accents.

Figure 2: This screen shot from PreSonus Studio One illustrates several arrangement tricks that add interest to a loop-based composition.

The section outlined in yellow shows that the loops in tracks 1, 2, and 4 have been pulled back for two beats, giving a “breakbeat” that’s carried by the snare loop in track 3. The loop starting at measure 57 in track 1 has had the first 1/16th note cut, copied twice, then placed as two successive 16th notes leading into measure 57 (colored white for clarity).

Tracks 5, 6, and 7 use only selected sections of the original loops (outlined in purple); in track 5, one of the loops is cut into a section that’s only one beat long.

Many loop libraries, particularly for drums, include one-shot samples of the sounds used in the loops. Use these to add off-beat hits, accents, and in general, to supplement loops with additional drum sounds to prevent boredom from setting in. Even better, you can use them to create new loops and fills with the same sound as the loops from which they came, so you know they’ll all fit together properly. You can either drag these one-shots into audio tracks, or load up a sampler or drum module with them and trigger the one-shots with MIDI notes.

Here’s another useful anti-boredom tool for audio drum loops. Suppose a drum loop plays during the intro to a verse, and during the verse itself. Detune the portion behind the verse by around a quarter- to half-step or so; this timbral difference supports the change in the song from intro to verse. You may be able to detune without changing the loop length; if not, use the host program’s DSP to stretch the loop back to the original length while retaining the altered pitch.

Detuning is also great with cymbals, because you can use it to turn one cymbal into a family of cymbals. If you define the cymbal as a one-shot instead of a loop, changing tuning also changes duration. You can even obtain a gong-like effect by layering two cymbal sounds. Detune one by about a half-dozen semitones; detune the other by a much greater amount, like 20 or more semitones.

Figure 3: In Studio One, calling up the Inspector for an audio event lets you choose automatic time stretching where a loop with a known tempo (either with tempo information encoded in the file, or which you specify) stretches as needed to fit the project tempo.

Even small tempo tweaks can be very effective—speeding up adds tension, and slowing down adds release. If you haven’t worked with tempo changes, you’re in for a treat because these changes can add life to your music. One of my favorite techniques is to pull back just a little on the tempo before a “big chorus” (and if the chorus isn’t big, the slight tempo shift will make it seem bigger because it builds anticipation).

Changing keys (modulation) was a technique used in many pop songs of days gone by to make something that repeated sound “different,” and maybe it’s time for a revival. This is super-easy to do with MIDI loops—either use an edit function that does transposition (Fig. 4), or just drag the MIDI notes up or down in piano roll view. With audio, Acidized files can respond to pitch changes automatically if the host program, like ACID Pro or Cakewalk by BandLab, has a way to enter pitch markers. Otherwise, transpose manually using a host’s transposition options. 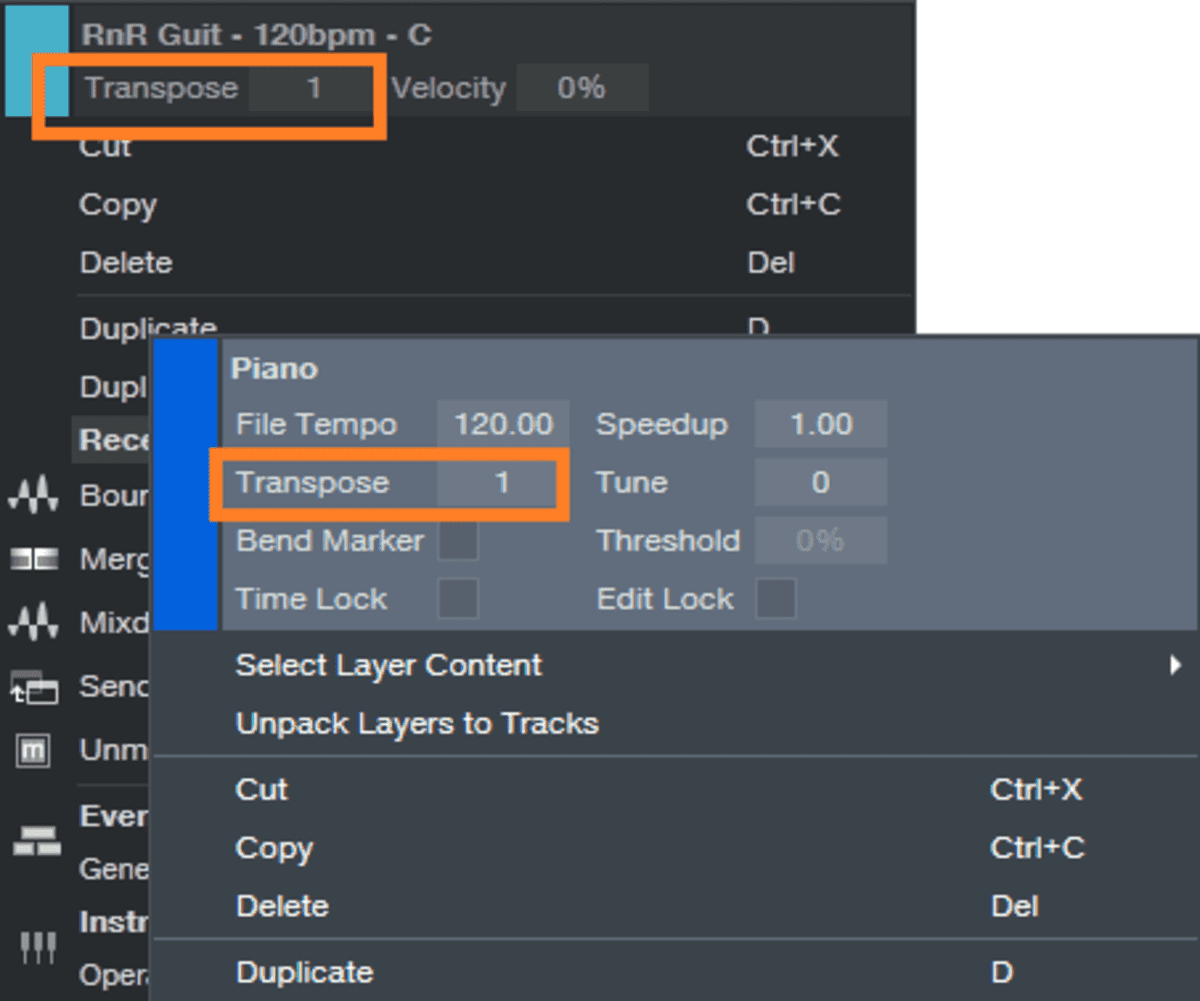 Given that loops are supposed to make our lives easier, it may seem like this post advocates spending a lot of time on editing. Well...it does. But bear in mind that loops aren’t designed to be music, they’re designed to be components of music. How you put those components together is what creates the actual music—and in that respect, what you get out of loop-based music depends on what you put into it.